Here is a reminder to all who participated, and to others who are curious, of our experiences during the Art of Hosting training in Canberra, 26-28 February 2018 - our collective memory.

​Thank you to all of those creative souls who contributed to this harvest - writers, speakers, photographers, interviewers, participants and hosts.

Our check in: Why are you really here?

Our first time together, sitting in circle, we each shared why we were really here

Steve introduced the Four Fold Practice - known as the core practice or the DNA of the Art of Hosting. Later participants shared what they were learning.  NB: the video recording is from the hosting team design days

Open Space: What are the conversations we want and need to have now?

We are who we are because of each other

At the end of day two, Johanna and Janet (of Canberra's A Chorus of Women) led us in a check out we won't forget - Ubuntu

I have a dream

​Check out: What declaration of intention do I want this circle to witness?

Our final time together in circle, and this as an invitation to speak and be witnessed.

What's been most useful?

What's been most impactful?

Some ways to stay connected to other practitioners:

From the hosting team

We began when Janet made a public commitment at a DemFest circle of the Canberra Alliance for Participatory Democracy on 19 June 2016, to call an Art of Hosting training in Canberra. She wanted to establish a Canberra Dialogue Centre, building on her existing work with the Chorus of Women, which over many years had run multiple gatherings called Canberra Conversations. Dave also felt a call for a training south east NSW.

Mark, a member of the ANU dialogue group with Janet and Lyn, had called an Art of Hosting training at Murramurrang on the NSW south coast in 2010, that Janet and Dave attended and Lyn helped organise.

The first meeting of the team was in June 2017, and 12 video meetings were held before the training was hosted into life on 26-28 February 2018. Jane, an Australian steward, invited other experienced hosts Moze and Mel, and international steward Steve to join. We later welcomed Anne-Laure (Anna) and Ellie to the team in January 2018 as apprentice hosts from Vietnam. In the end Ellie was unable to make it due to visa challenges.

The hosting team worked in sub teams for elements of the groundwork, including the invitation, logistics, economy and harvest teams. We explored need and purpose and co-created the calling question, “What becomes possible when we learn to skilfully practice generative conversation?" - a powerful, energising and unifying moment. The conversation in the economy team was also rich with possibility and abundant intention and a demonstration of being generative.

The hosting team Janet, Lyn, Jane, Mel, Steve, Moze, Dave, Anna and Mark gathered face-to-face, for the first time, two days before the training. Setting principles for the design process, using the multiple experiences of hosting previous trainings, and listening to the needs of the participants who were joining us, we ‘discovered the agenda that wanted to emerge’.

We identified a hosting team of two to hold the space for each day of the workshop (an experienced host and an apprentice), with others holding specific roles. We used the breath pattern (or Diamond of Participation) as an overlay to design the 3 days, from the calling question through to the harvest. Each day was themed: Stepping in to community, Stepping up into community, and Stepping out into community.

On Sunday afternoon we moved into the venue and co-created materials and resources, and prepared the space for the circle to start on Monday morning. We had rich conversations and shared meals together each day to share our learnings, and fine tune the design dependant on the energy of the group.

Thursday morning after the training we hosted a team checkout circle, with a rich and generative conversation about the final economy, and closing our time together before heading home. We met online several weeks later for deeper reflection and to complete what was needed. ​ 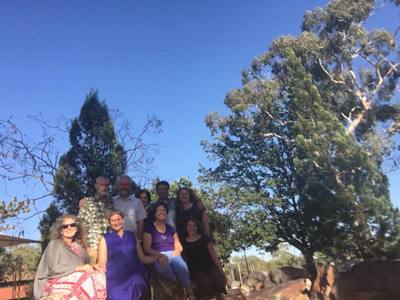 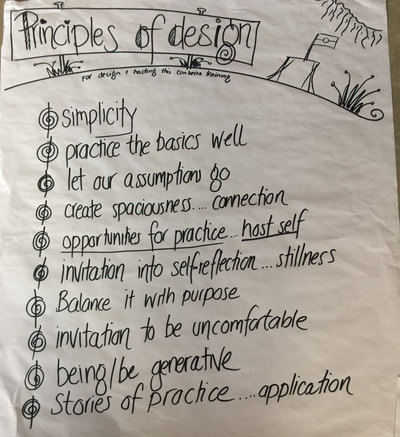 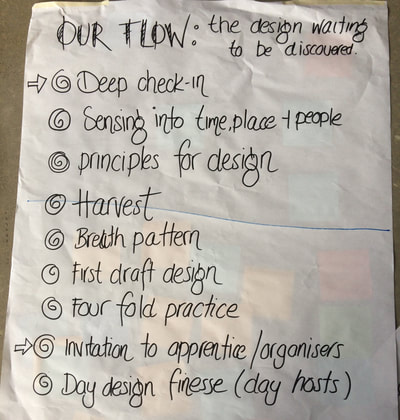 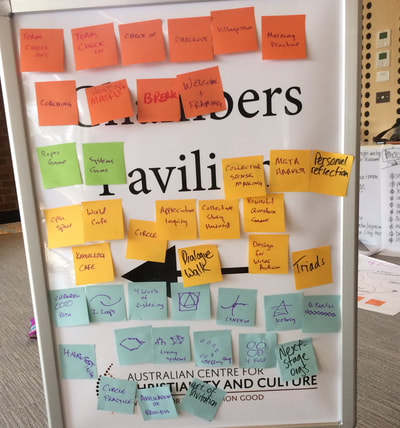 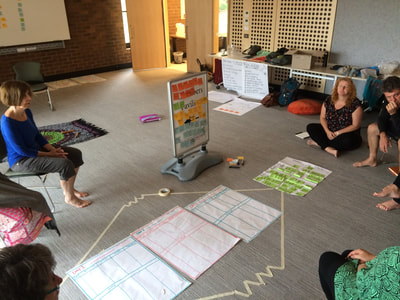 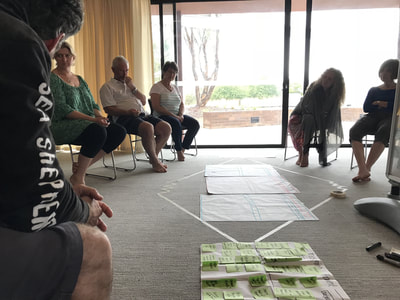